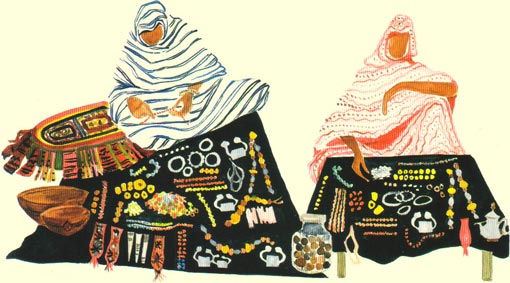 Before the drying up of the Sahara, the today Mauritania was inhabited by human groupings of Hamito-Mediterranean stock that had a common linguistic and, socio-cultural background.

The Roman contemporaries, with whom they used to have endless clashes, called them: Berbers which meant the aliens. There were also other inhabitants belonging to the black race: among these there were the Bafours whom were to be thought to be one of the first inhabitants of the oases in the Northern part of the country, the peuhls, cow-breeding nomads whom came from the upper-Nile sometimes during the 3rd millennium , the Soninke, the founders in a later period of the mighty Ghana Empire which stretched over the entire south-eastern part of the present Mauritania and finally the wolof present in the southern part of the country.

The introduction into North Africa of the camel as far back as the 2nd millennium had led to the development of trade and socio-cultural exchanges between the Northern and the Sahelian parts of Africa.

O wing to this animal which constituted a mean of transportation particularly suitable to the hard condition of the desert, the Sanhaja tribes of Berber origin had managed to progressively spread out southward as far as the borders of the Ghana Empire where, they had founded the town of Aoudaghost which had been described by the Arab explorers Ibn Haoukal and El Bekri in their writings “El Memalik Wal Massalik”.

The political and religious movement AL MOURAVIDES which developed in the XI th century on the Mauritanian shores under the leadership of the Berber preacher ABDULLAH IBN YACINE , had tremendous impact on the empire of Ghana in the South as well as on the kingdom of Morocco and on the northern Moslem Spain .

Around the XVth century, the Arab tribes (Beni Hilal, Beni Souleim, Beni Hassan and others) coming from the Arabic peninsula via Egypt, Tunisia and Morocco, had in successive waves penetrated into Mauritania.

From the out-set they clashed with the oases inhabitants and collided with the indigenous Berber tribes: the Sanhaja.

The Arab and Sanhaja tribes intermingled and through inter-marriages became integrated and ended up forming the socially and culturally homogeneous arab community that had ever since existed in Mauritania. 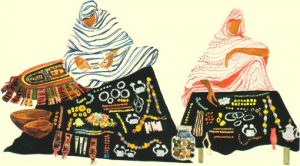